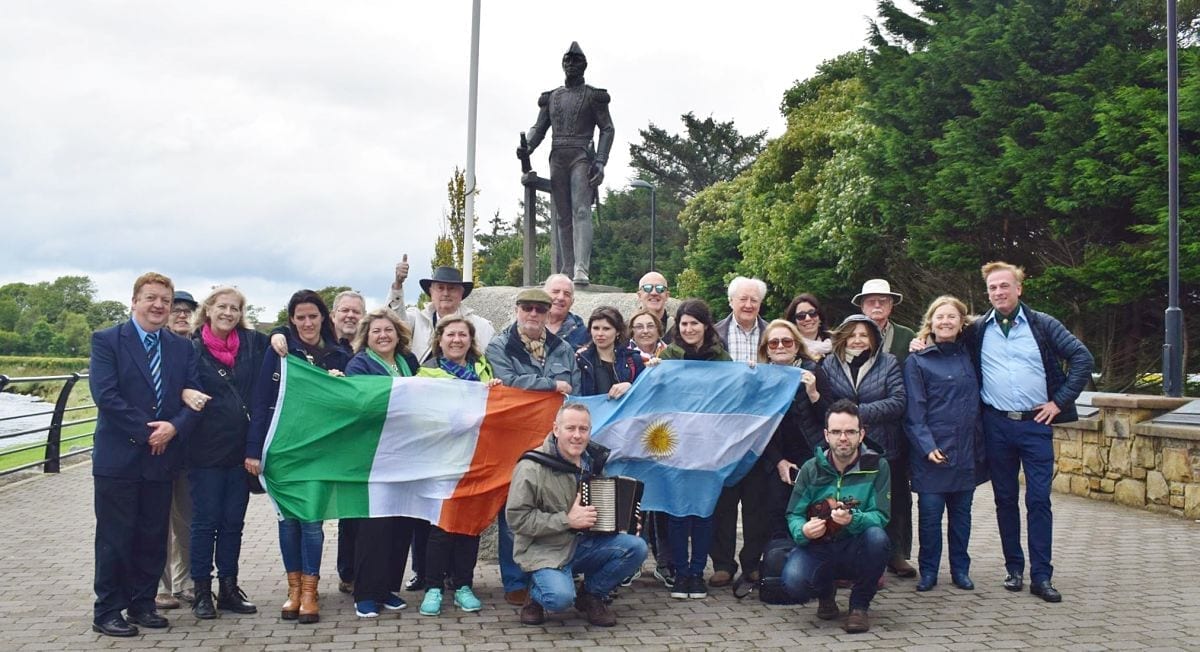 Foxford’s Admiral Brown Society was delighted to host and welcome the Argentine / Irish Association “Almirante Brown” on their recent visit to Foxford in August 2017 – the birthplace of the hero of Argentina, Admiral William Brown. And what a delightful pleasure it was for Oliver Murphy, on behalf of the Society to welcome them to Foxford.

Their visit commenced with a tour of the Admiral Brown Museum (now sadly closed), where Jorge Mackey on behalf of the members of the association, presented a wonderful bronze plaque, depicting the image of Admiral William Brown to the museum, a gift which will no doubt be cherished and placed in a prominent position, in the museum.

Members of CCE Admiral Brown, John McHugh, Maria Lynn, Tom Doherty and David Doocey delivered a wonderful performance of traditional Irish music, much to the delight of the Argentine visitors. During a delicious meal in the Foxford Woollen Mills Café, the group burst into an impromptu song in spanish entitled “Solo le Pido a Dios” (I only trust in God) and afterwards their driver, Calvin Marillier sang a excellent rendition of “Amazing Grace”.

The group then visited the new Admiral William Brown Promenade, on Green Road and were very impressed with all that has been achieved in the ongoing quest of the Admiral Brown Society and the local community to raise the profile of and honour the Admiral.  And as the group departed our town for the Knock Marian Shrine, it was evident that the group had enjoyed visiting Foxford, and experienced some enriching memories to take back to Argentina.

About the Admiral Brown Society

A voluntary, non-profit-making organisation based in Foxford, Co. Mayo – the birthplace of Admiral William Browne – The Society is dedicated to ensuring that his extraordinary legacy and life story, which bonds together Ireland and Argentina will not be forgotten. The Admiral helped to create Argentina, overseeing famous victories over Spanish and Brazilian fleets, usually against overwhelming odds and over 1,000 streets, 400 statues, several towns and a major city bear his name in his adopted land.

In Foxford, you can visit the Admiral William Brown Promenade, (on Green Road) the Admiral Brown Monument, (on Chapel Road) and the Statue of the Virgin of Lujan in Saint Michael’s Church on Chapel Road.

Visit the historic town of Foxford where a warm welcome awaits you!