In recent months, friendships have deepened as associations and citizens from Ballina and Athis-Mons (France) have worked together on initiatives of film and memory, against the backdrop of a formal twin town relationship dating back to 1993.

In the first of these initiatives, in October 2018, Ballina welcomed a film crew from Athis-Mons to the North Mayo capital to collect information for a short film ‘Stephen Kennedy – an Irish Soldier in the Great War’. Subsequently, on January 26, two local filmmakers – Topher Neville and Behy N.S. Film Club, led by Principal Pat Cunnane –  participated in the 11th International DiViPassion Short Film Festival in Athis-Mons and were delighted to win the Festival Favourite and Jury Prizes. 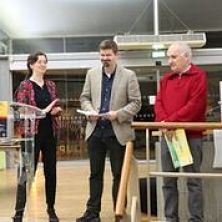 The initiatives have been facilitated by the Ballina Municipal District of Mayo County Council, Mayo North Promotions Office and members of the local community who have worked together in recent months to strengthen connections between the two towns. 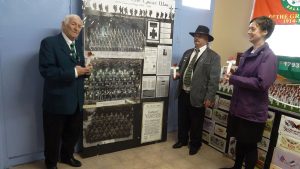 Christian Fages (Athis-Mons/Ballina Twin Town Association, France) and Christian Allain (DiViPassion film association, Athis-Mons) contacted Ballina Municipal District ahead of a visit to the town from October 4 – 8 to shoot a short film about local man Private Stephen Kennedy, the first Irish soldier to die in France during the First World War. Private Kennedy is buried in Athis-Mons Cemetery.  The project had special significance last Autumn, as November 2018 was the centenary of the Armistice, which ended hostilities in the Great War. 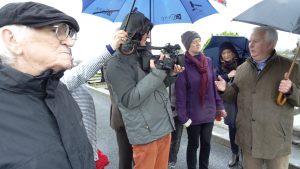 Interaction with various groups and individuals in Ballina

During their visit, the crew visited the Jackie Clarke Collection to consult documents relating to the First World War. They were grateful for an interview with local historian P.J. Clarke (Ballina Comrades of the Great War), who at the setting of Ballina’s First World War Memorial at the Green Park, provided valuable information about Stephen Kennedy and his family. He introduced the film party to local man Terry Kennedy, a grand-nephew of Stephen Kennedy, who spoke about his pride in his ancestor’s bravery in electing to go to War and told that three of his granduncles had died in the First World War. Councillor Gerry Ginty gave a tour of Leigue Cemetery to the film crew, and they visited the Kennedy family grave followed by the family’s home village of Ardoughan. Noel Gillard (Ballina Comrades of the Great War) and P.J. Clarke introduced the party to a handcrafted World War I replica cemetery, commemorating each Ballina soldier who died during the Great War, at its location in Ballina Men’s Shed.

The film group interviewed local historian Terry Reilly about life in Ballina around 1914 and about the social, economic and political reasons for Mayo soldiers deciding to go to war. During their visit, local historian Stephen Dunford of ‘In Humbert’s Footsteps’ gave a fascinating interview about the landing of the French expedition led by General Jean Joseph Humbert at Kilcummin in Killala Bay on 22 August 1798, and the events leading up to the establishment of the Republic of Connacht. 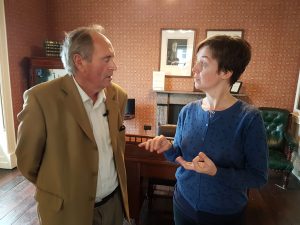 Ann-Marie Kilgallon (Mayo North) assisted as interpreter during interviews and provided post-filming assistance in terms of translation, voiceover and some historical precisions to the DiViPassion production team (Athis-Mons).

The film “Stephen Kennedy – Un soldat irlandais dans la Grande Guerre” – was screened for the first time at a special ceremonial event in Athis-Mons on Sunday 11th November. Viewers were captivated by the story of the film crew’s trip to Ballina.

Topher’s film ‘A Famine Portrait’, shot in North Mayo, tells the fictional story of Bridget Lennon and her family during the Great Famine in this area.  ‘The Battle of Ardnaree’ explores a tragic ambush on the banks of the River Moy in 1586, and is produced by the Behy National School Film Club.  Both films were presented at the Festival in French version. The film about Stephen Kennedy was also screened at the event.  ‘A Famine Portrait’ was awarded the Festival Jury Prize. Meanwhile, the DiViPassion Coup de Coeur (Favourite) Award was given to Behy National School for ‘The Battle of Ardnaree’.

Councillor Michael Smyth, Cathaoirleach of Ballina Muncipal District, said: “I’m delighted to have hosted the delegates who visited Ballina from Athis-Mons at the start of October. Cultural relationships broaden us. It’s important to build rapport with our neighbours and this is what we’re always trying to do. When we reach out into our history and our connections we have coming together. The relationship between Ballina and Athis-Mons has been further strengthened because of Stephen Kennedy –  he has bound us together.”

Carmel Murphy, Ballina Municipal District, said: “It was a pleasure to work with the delegates from Athis-Mons in recent projects. We are proud of the twin town relationship between Ballina and Athis-Mons that is now in its third decade. Many activities have already taken place over this time, including those of a cultural, social and now artistic character.”

Ann-Marie Kilgallon (Mayo North Promotions Office) said: “The development of relationships and friendships like our connection with Athis-Mons are positive for tourism development. Persons from Athis-Mons may come to Ballina because they know that they will be welcomed as friends here. They may ensure they’ll take in Ballina on a tour of the Wild Atlantic Way because this is a place that they have heard about and with which they share links.”

The film about the experience of Private Stephen Kennedy in the First World War, entitled “Stephen Kennedy – un soldat irlandais dans la Grande Guerre”, produced by the DiViPassion Association (Athis-Mons), may be watched here. One may view a trailer for “A Famine Portrait’ by Topher Neville online.

Further information on Ballina and Athis-Mons: