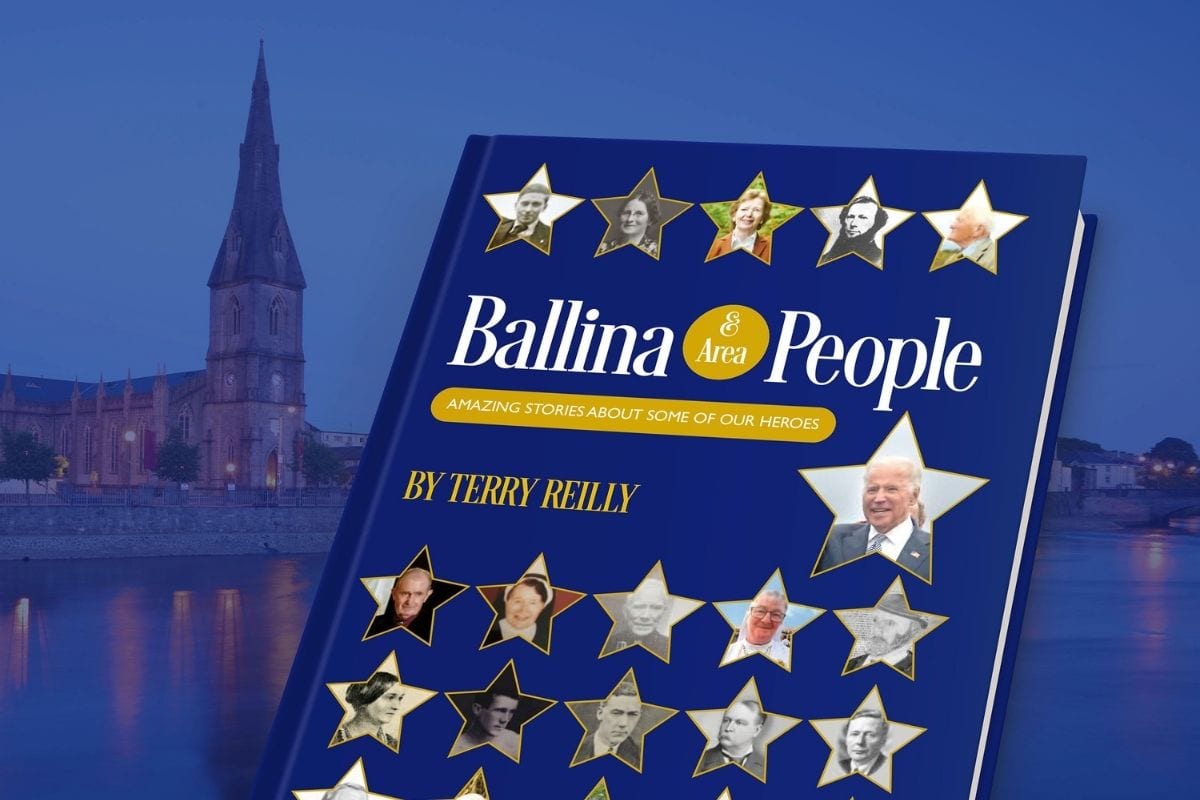 One of the most fascinating parts of an area’s history is quite simply, its people, whose stories make up the fabric of our place as we know it. The footprints of many people from North Mayo have landed all over the world, and their influence is wide. Many more never left these shores, but in lives extraordinary, made meaningful and long-lasting contributions to the area. In this post, author Terry Reilly shares with us a preview of his new book, Ballina & Area People, that shines a light on some of our locals.

Over the coming weeks here on our website, and on our social media channels, we’ll be sharing more incredible stories of Ballina’s history and people, thanks to a number of local contributors.

“History has an intriguing way of capturing interest in an area and drawing people here, as I have discovered over the years. And relating history does not have to be over-academic, over-convoluted, or locked – as we were when attending school many years ago – in the prism of the Fir Bolgs, or Tuatha Dé Danann, interesting and all as those ancient tribes were.

Generally, I find people become interested in history if one provides a hook they can swing off,  for instance – “Did you know that the person who lived in that little house at the bottom of the lane was?” A bit of colour, a bit of romance, a bit of intrigue, a bit of WOW!

I like writer Jodi Picoult’s quote:  “History isn’t about dates and places and wars. It’s about the people who fill the spaces between them.”

“Life goes on, it always has,” wrote American poet Robert Frost. Very true, but as it goes on layer after layer of time buries memories under dust, memories of great people who made notable contributions. It would be a real pity were they to be forgotten.

With that in mind, I have just launched my latest book, Ballina & Area People which contains a selection of those who went before us – and to hold them up as examples of what can be achieved, often against great odds and catastrophes such as the Great Famines, occupation, the Spanish ‘flu, wars, TB, polio, poverty, etc., etc.

Ballina & Area People and signposts the potential benefits that lie in tapping into and developing worldwide networking, by retracing the footsteps of our past – and present – generations – who have ended up all over the world.

My selection deals with (In alphabetical order):

In the telling of their stories, many others are drawn into the narrative. Let’s pick a couple from the above list.

The remarkable Edward Whelan, born in 1824, left Ireland as a young boy with his mother for Canada. His climb up the ladder was nothing short of astonishing. He entered journalism while still a teenager, edited one of the leading newspapers in Prince Edward Island, was a great orator, a talent which left those spellbound when he took up politics.

As a politician, he was a “staunch advocate for free government, free education, free lands and other blessings.” More than that, he went on to become one of the Fathers of the Canadian Confederation, sharing that distinction with, amongst others, fellow Irishman, Thomas D’Arcy McGee.

Whelan is memorialised in Charlottetown which today is a flourishing community of over 34,562 people located on the south shore of Prince Edward Island. It’s the capital city of Prince Edward Island and is called the “Birthplace of Confederation” after the historic 1864 Charlottetown Conference which led to Confederation. Great potential here for twinning!

A small group of people know who composer William Vincent Wallace and his sister Eliza were. Their names were ‘revived’ when a small, dedicated team in Ballina marked the bicentenary of his birth in 2012. Though William V’s people were from the Ballina/Killala, he was born in 1812 in Waterford where his father was stationed with the North Mayo Militia. He lived in Ballina where his younger sister Eliza Wallace was born in 1820.

He was the touring rock star of the 1800s, feted wherever he went. His travels took him worldwide. In Australia, in September 1836, the family featured at a major music event at St. Mary’s Cathedral in Sydney. It was in aid of the cathedral’s “organ fund”, and on that occasion the Hallelujah Chorus was heard a mile away as the building was then without its roof and the sound echoed out across the young city.

Wallace was musical director of the first opera house to be built in Mexico City, in 1841, made his US debut in New Orleans in 1842, and starred as a virtuoso in New York in 1843. When he died in France in 1865 the New York Times in a tribute lauded him as “the most popular composer that ever lived amongst us.”

An Australian newspaper proclaimed that Eliza Wallace would “‘become the first singer in the southern hemisphere”, and she did just that. In Sydney she became a ‘fashionable’ singing teacher; her pupils were to form the core of the next generation of that country’s singers. She hosted concerts annually for many years and raised much money for many local charities, including the Randwicke Asylum for Destitute Children.

A bronze plaque was erected by the Wallace Committee in Ballina’s Military Barracks in 2013 in memory of brother and sister. Hopefully, it will be moved to a more visibly advantageous location when the Quarter is refurbished.

Continuing the musical connection, very, very few in the Ballina area know anything of a certain Lesley Stuart who was born in Stockport, England of Ballina parentage. His real name was Thomas Barrett, born in 1863, and he was a friend of Charles Stewart Parnell.

Stuart wrote the music to several well-known songs, including “Lily of Laguna” and  ‘Florodora’ which had successful runs in England and America. He visited Ballina to trace his ancestry, but you will have to read the book to learn of the fun he had on that visit… and lots more.

The achievements of the Ballina & Area People must not go untapped.  Some use must be made of Ballina’s Military Barracks, soon to become the Innovation Quarter hub,  to highlight our people strength. Using modern technology, the essence of a modern hub, wouldn’t it be fantastic to create stimulating imagery through its echoing corridors?  Imagine the reaction: ‘Wow! Look. He did that’! ‘Wow! Wasn’t she some woman’!

I have been very much buoyed up by the work of Ballina Community Clean Up, a group of great volunteers who have breathed new life into the town’s environs and the sense that there is emerging a laudable synergy and common purpose melding between many of the groups and organisations in the town.

Hope you enjoy the book. It’s a limited, hardcover edition, complete with a Joe Biden-related bookmark; costs 20 euro (postage extra), and is on sale in outlets in Ballina, Castlebar, Westport and hopefully at Ireland West Airport Knock when things get back to something approaching normal.”

How to buy Ballina & Area People

Signed copies are available online from: