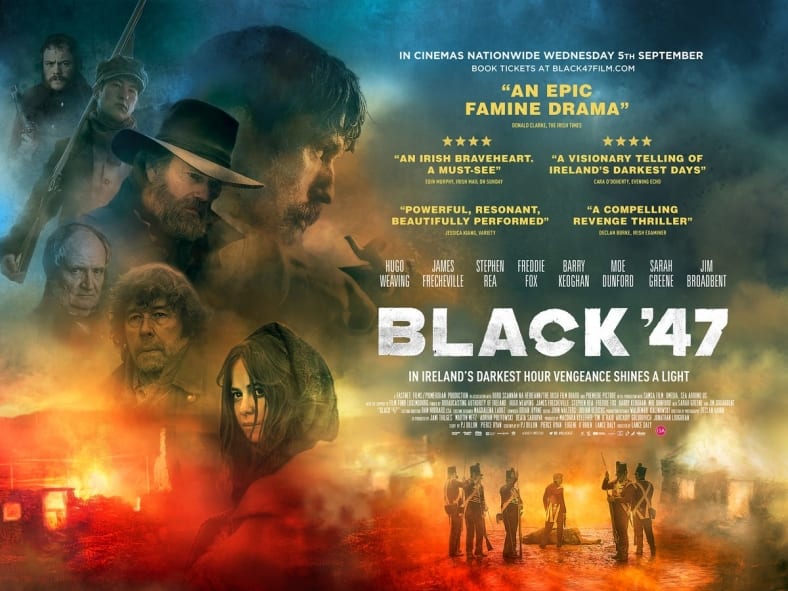 The President, Superintendent Joe Doherty and the members of Ballina Lions Club cordially invite you to a special screening Black ’47 at Ballina Arts Centre on Tuesday, October 9 at 7.30pm.

The screening is a fundraiser for a major Famine Exhibition, which will open on Saturday 20th October at Ballina Civic Offices and run for a number of months. Any surplus funds raised will go towards relieving homelessness in Mayo and to general Lions’ charities.

Kicking off at 7.30pm, the screening will be preceded by a wine and cheese reception.

Tickets for the fundraising screening will cost €20 each and can be bought from the Ballina Arts Centre Box Office (tel: 096 73593) or online at www.ballinaartscentre.com.

Ballina Lions Club would like to acknowledge the generosity of Wildcard Distribution and Rebecca Bourke for kindly facilitating this special screening at no cost, and the members look forward to welcoming you on the night.

The film follows the exploits of Feeney (Frecheville), an Irish soldier who has abandoned his post with the British Army to return to his west of Ireland home on to find his mother starved to death, his brother hanged, and his sister in law and her children starving.  As he sets out for revenge, a violent British soldier (Weaving) is sent to track him down. Mixing history with the tropes of Westerns and revenge thrillers, Daly has created a significant and long overdue addition to the Irish canon.

This screening comes at a time when there is a flurry of famine-related activity in Ballina.

A four-day commemoration of Mayo’s Forgotten Orphan Girls will take place the week after the screening, and Ballina Lions Club will host the Famine Exhibition in Ballina Civic Offices, opening on October 20th.