Ballina is officially celebrating after receiving the news that the town has been awarded the prestigious Purple Flag accreditation for its evening and night-time economy (ENTE), meaning the town has succeeded in retaining the honour since it was first awarded in 2014.  Similar to the Blue Flag for beaches, Purple Flag aims to raise the standard and broaden the appeal of town and city centres between the hours of 5pm and 5am. Areas awarded the Purple Flag are recognised for providing a vibrant and diverse mix of dining, entertainment and culture while promoting the safety and wellbeing of visitors and local residents.

Since 2007, the programme has awarded the Purple Flag status to over 70 towns and cities in the UK and Ireland. Purple Flag accredited areas have all reported a consistent increase in footfall and a decrease in crime within the ENTE. The Purple Flag programme is managed by the Association of Town and City Management (ATCM) which works alongside – a partnership of key stakeholder groups backed by Government, police and businesses.

Hugh Rouse, President of Ballina Chamber of Commerce said: “Ballina Chamber of Commerce is proud and delighted to have retained the Purple Flag Award for the sixth year in a row, since it was first awarded it in 2014. The town team, made up of the private and public sector and community groups who have all contributed to the Purple Flag Award, work collaboratively in creating a safe and vibrant night time economy for Ballina.  Events such as Ballina Salmon Festival and Other Voices are fantastic examples of evening and night time events that bring people into our wonderful town, enjoying a family friendly festival atmosphere.”

The assessors’ report acknowledged that Ballina has provided a really jam-packed highlights section and is clearly an example of best practice in Ireland. Three initiatives that stood out were the Best Kept Town in Ireland 2018, the launch of Phase 2 of the Monasteries of the Moy Greenway and an increase in events and festivals in the area.

Superintendent Joe Doherty, Ballina District Officer said: “Ballina and its district has had a 12% drop in Crime figures for period 2017-2018, and this can be equated to a concerted effort and working partnership between Ballina’s An Garda Siochána, Ballina’s business and community groups, Ballina Chamb er of Commerce, and a strong community Garda presence on the streets of the town.  Ballina’s CCTV has made a huge impact in convicting criminals and coupled with the Business Text Alert scheme, the message is out there that Ballina and the district will not tolerate criminal activity of any sort.  It is a wonderful achievement for Ballina Town team and Chamber of Commerce,  retaining the Purple Flag status, the accreditation process takes towns and cities through a comprehensive set of standards, management processes and good practice examples all designed to help transform the evening and night time economy.” 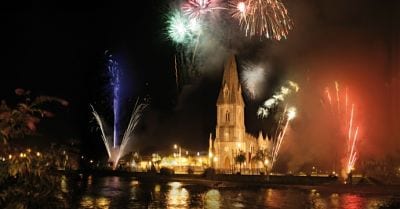 Hugh also stated: “We are especially delighted to announce Ballina’s retention of the Purple Flag Award on the night of the pre-screening of Other Voices Ballina programmes, in Ballina Arts Centre. It is fitting that we celebrate the Purple Flag Award at this time, as Other Voices played a pivotal part in the 2018 Purple Flag application, including the Ballina Music Trail and Other Voices After Party running late into the night in Ballina, with no arrests or criminal offences committed over the weekend in September.”

Sarah Walker Purple Flag Programme Manager at the ATCM said: “There are now over 70 towns and cities across the UK and Ireland who are proudly flying the Purple Flag after working hard to gain accreditation. The award is not just about safety, but also the vibrancy and diversity of the evening and night-time offer — this can only be achieved by people working together in a strong partnership to which we are seeing great examples of across the country.”

We in Mayo North are proud to see Ballina boasting such an award and welcome visitors to the town to come and enjoy our beautiful town at night-time.