GoBus.ie launches its Ballina to Galway City route with a €1m investment

The award winning National transport and coach company GoBus.ie, celebrating 10 years in business,  has announced over €1m investment and 10 brand new jobs for Ballina, Co Mayo as it expands its services. GoBus.ie launches its Ballina to Galway City route – its first ever Regional Connect Route –  from April 1st.  This is no April Fool!

We in Mayo North are delighted to welcome GoBus.ie to Ballina, and as well as offering people locally access to an improved service to Galway, we hope to be welcoming many new visitors to Ballina and North Mayo from further south, as a result of this new route.

GoBus.ie launches its Ballina to Galway City route, offering Mayo commuters from Ballina and the surrounding hinterland the opportunity to connect with Castlebar, Claremorris, Tuam and Galway City  on a new daily service – and vice versa. Offering 5 return departures from 5.10am to 16.10pm from Ballina for an introductory offer of €5 per single fare (payable directly to the coach driver), the Galway City Departures will commence from 8.25am to 19.25pm daily on the same return route and the route will be serviced by award winning Volvo 9700 coaches, complete with free WiFi and power sockets for all passengers.

Ballina’s pick-up point will be  the Humbert Street, Ballina close to Dunnes Stores. The journey will connect with Castlebar, its General Hospital, GMIT Campus along with Claremorris and Tuam before arriving in Galway City, via the GMIT, City Centre and NUI Galway.  This new service provides ideal transfers for those attending college, university, hospital appointments in either Mayo or Galway or wishing to travel to Dublin or Internationally and connecting with any of GoBus.ie’s up to 20 daily departures to Dublin city and Dublin Airport from Galway’s new Coach Station off Eyre Square.

Creating 10 new jobs in Ballina, the new route will have Alan Fitzgerald as its Operations Manager.  A native of Mayo, Alan has an established track record in the coach transport industry and has worked previously with GoBus.ie

“After 10 successful years of Non Stop coach transfers between Galway and Dublin, we are now delighted to expand our services  and make a significant €1m investment Regionally and delighted that our first route connects Ballina, Mayo and Galway city,” says Jim Burke, MD GoBus.ie, “We are thrilled to appoint Alan Fitzgerald as our Operations Manager in Ballina where we are creating 10 new jobs on this new route.  Alan knows and understands the GoBus.ie ethos of delivering a punctual service which is focused on giving comfort, efficiency and value for money and more importantly he knows the Ballina and Mayo market”. 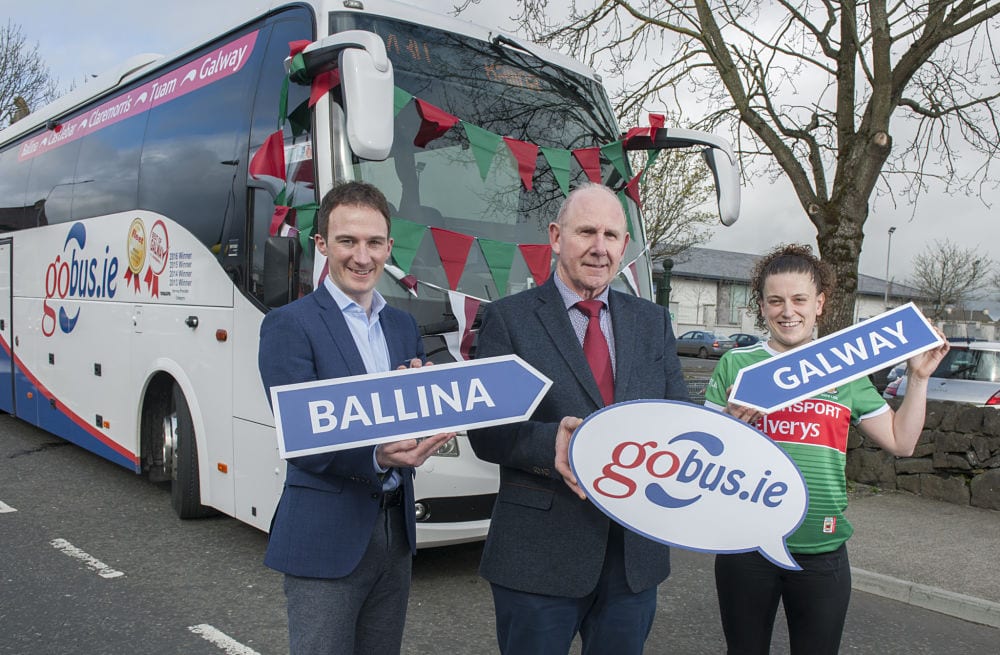 GoBus.ie, with its head office in Galway City and coach depot at Corofin, CoGalway, is a family owned and managed business by Galway and Corofin businessman Jim Burke and his three sons, Dara, Transport Manager, Donal, Fleet Manager and Cian as Depot Supervisor.  Collectively, the Burke  family and their team of 60 have built up an unblemished reputation for customers service, reliability, punctuality and a commitment to the travelling public of offering convenience, comfort and value for money on the Galway Dublin route.  They will now bring the same ethos to their first Regional Connect service from Ballina to Galway with a €1m investment in the service as GoBus.ie launches its Ballina to Galway City route.

Jim Burke has over 30 years experience in the coach transport business, as an experienced coach operator he knows and understands intimately the needs of the travelling public. Flexibility, choice, personal service, value for money in addition to the utmost in safety and comfort are the company hallmarks while ensuring commuters have access to power sockets and WIFI for all mobile devices thus endeavouring to give the absolute GoBus.ie travel experience. Such commitment to service has yielded much recognition for GoBus.id. The company’s commitment to value for money for its customers is a priority offering inexpensive fares and ultimately generating savings for the customer, in avoiding fuel costs, toll charges, and parking charges and allows relaxing and stress free travel for the leisure and business traveller alike.

GoBus.ie will continue to lead the way in Ireland’s transport sector as the award winning coach provider connecting the West and the Wild Atlantic Way with Dublin and International travel. The recent investment in Regional Connectivity marks the start of the second decade of GoBus.ie’s ambition to continue to connect the travel public regionally and nationally.

For the most up to date information on all GoBus.ie activities, log onto www.GoBus.ie.