The origins of Hallowe'en are Irish 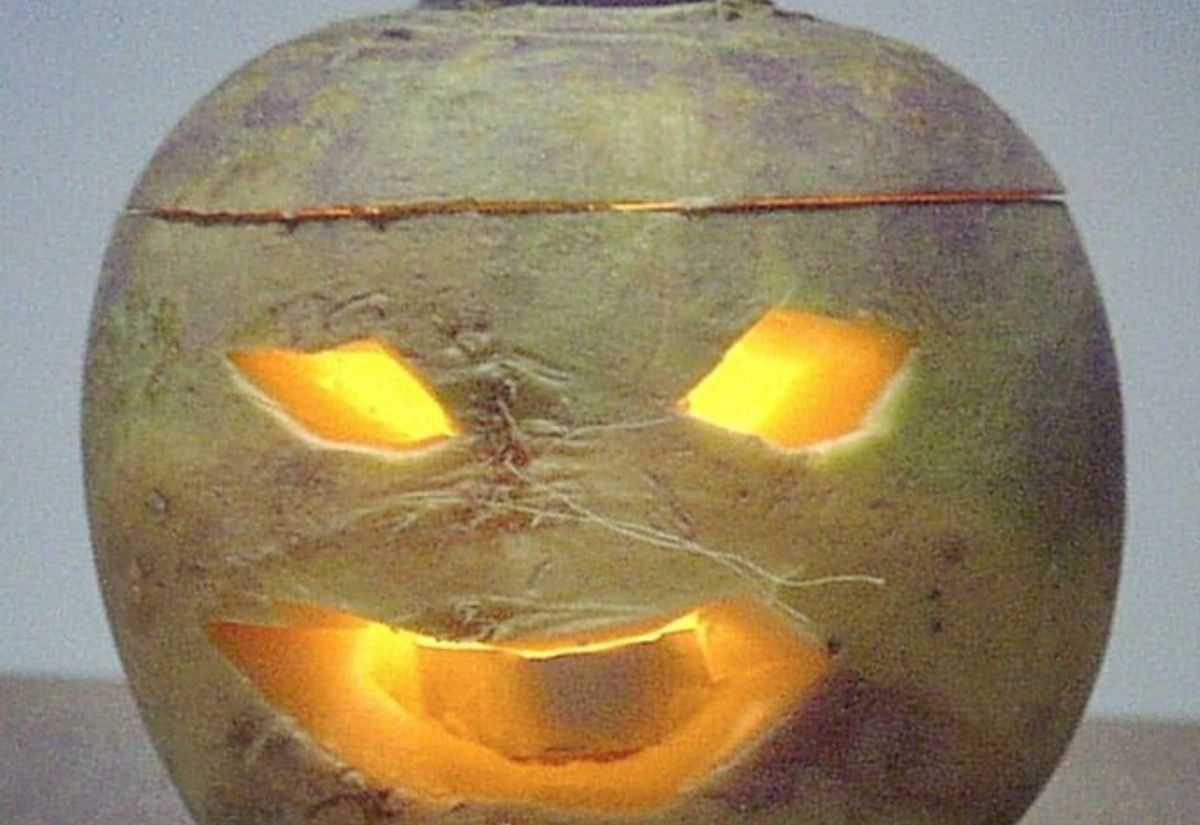 Hallowe’en or All Hallows Eve is today one of the most popular nights of the year but its ancient origins are Irish. Here are some of the old traditions.

In ancient Ireland Samhain was one of the important dates in the calendar. On the eve of Samhain on what we now call All Hallows’ Eve or Hallowe’en all household fires were extinguished and a great bonfire relit. Samhain is the ancient Irish/Celtic New Year and the quenching of all fires symbolised the passing or death of the old year and the lighting of the sacred fires the beginning or birth of the new year. The ancient Irish believed that at Samhain mother earth fell into a slumber and did not awaken until February 1st or Imbolg

To protect themselves when out and about on All Hallows’ Eve from evil spirits people would wear ‘false faces’ in order to spook the evil spirits. This is where the concepts of wearing masks came from.

Some evil spirits were well known across Ireland and were household names. One of the most famous of these was ‘Stingy Jack’ or ‘Drunk Jack’. Jack was known throughout the land as a cheat, swindler and trick player. Legend has it that Satan heard rumors of Stingy Jack’s evil ways. Satan went to find out for himself whether or not Stingy Jack was as notorious as the rumors suggested. One night drunk Jack was wandering the countryside when he came upon Satan in a humanlike form. Satan had come to collect Jack’s soul. Jack made one last request from Satan before his departure for Hell. Jack requested one last ale before their departure. Satan granted the request, travelling to a local pub. Jack asked Satan to pay the tab, to his surprise Satan agreed. Stingy Jack convinced Satan to change his form to a silver coin in order to pay the bartender. Jack placed the silver coin into his pocket which also contained a crucifix. The presence of the crucifix kept Satan from escaping his confined form. Satan was coerced into agreeing not to take Jack’s soul for ten years in return of Satan’s freedom.

Ten years passed to the exact date when Jack originally struck a deal with Satan. Jack found himself once again in the presence of Satan in the exact same spot a decade earlier. As Satan prepared to take Jack to Hell, Jack requested if he could have an apple to feed his starving belly. A foolish Satan granted his request and climbed an apple tree to fetch an apple. While Satan was in the tree, Jack placed a number of crucifixes around the tree trapping Satan. Satan demanded his release. Jack refused to release Satan unless he promised to never take his soul to Hell. Satan agreed and was freed.

The drink eventually took its toll on Jack and he died. Jack’s soul arrived at the pearly gates. As he was about to enter Heaven Stingy Jack was refused entry to Heaven by God because of his sinful life. Jack’s soul was sent to the gates of hell where he begged to be let in. Satan fulfilling his agreement refused Jack’s soul. To warn others, he gave Jack an ember from the fires of Hell marking him as an inhabitant of neither world, forcing his soul to wander for an eternity between the planes of good and evil with only the ember in a hollowed tunrip to light his way. This became known as the Jack o’lantern.

When the Irish emigrated to America they brought Hallowe’en customs with them. Turnips were not available to the Irish in America. Pumpkins were in available and so the tradition of carving a pumpkin and placing a candle in the hollow was born. You may see a traditional Irish Jack o’lantern in The National Museum of Ireland Country Life in Turlough

The Báirín Brack, Barm Brack or simply known as the Brack is another ancient Irish tradition but has seen a few changes down the centuries. In Ireland in many houses to this day the cutting of the brack is a moment of great excitement. According to tradition finding one of the items hidden in the brack would tell your future.

A Pea: The finder will not be getting married in anytime soon

A matchstick: You would be married but the marriage will be an unhappy one

A thimble: If a woman found a thimble she was destined to never marry and remain a spinster

A piece of cloth: Your life will be marred with bad luck

A coin: you will be blessed with wealth and good luck

A ring: the finder will be married by the time the next Hallowe’en rolled round

A religious medal: the finder was destined for the priesthood or a nun

The ring is the only item that remains in the brack to this day.

Colcannon is a traditional Irish dish was served on Hallowe’en. A mix of cabbage and mashed potatoes served with butter. In the past an unmarried woman would take the first and last spoonful and put it into a stocking. The stocking was hung by the frame of the front door. The first man to enter the house and pass beneath it would become their husband!

Hallowe’en was a night of games and playing tricks. A popular game played on Hallowe’en night was Apple bobbing which as the name suggests participants must bob for apples floating in water with their teeth.

Trick or Treating is a modern custom in Ireland – it began in America. Playing tricks on All Hallows’ Eve is in fact an old custom. Young people would go about playing tricks in their neighbourhood such as throwing turnips or cabbages at houses, stealing gates or letting cattle free from their sheds or fields.

Hallowe’en was later Christianised. A tradition once existed in North Mayo that Hallowe’en crosses were made – samples of which can be seen in The National Museum of Ireland – Country Life in Turlough Castlebar.  The crosses were made (from various materials) in the hope of bringing the occupant good luck for the coming year – the crosses were also said to protect a household from fairies and evil spirits on All Hallows Eve.

The Irish were (still are?) superstitious people. Fairy mounds, trees or forts were avoided and no one walked alone.

If a candle quenched  suddenly it was said that spirit was present.

Holy water was sometimes anointed on farm animals to keep them safe during the night. If the animals were showing signs of ill health on All Hallows’ Eve then they would be spat on to try to ward off any evil spirits. An old Irish custom of spitting on a newborn baby was once common in Ireland.

On Hallowe’en one of the most feared fairy or goblin An Púca was said to  roam free on this night causing mischief. It is said that the Púca spat on blackberries on Hallowe’en night so children were warned not to pick the berries after this night.

The Catholic church later declared November 1st as a Holy Day of Obligation – a day when Catholics were expected to attend Mass and observe a day of rest. Many older people still keep this tradition.

Hallowe’en is part of our culture. We must do all can to preserve our customs and traditions before they are lost. So perhaps instead of a pumpkin, carve a turnip? Why not enjoy some barm brack? Maybe you’ll find the ring! Whatever you do, enjoy the night!