Plans are on schedule for a mini festival embracing the Autumn unveiling of a memorial to Mayo orphan girls sent to Australia from the county’s workhouses between 1848 and 1850, and amongst the attendance will be the Australian Ambassador to Ireland, Richard Andrews. Five days of events are planned to remember the Mayo famine girls, running from Tuesday, October 16, to Friday, October 19th.

A committee in Ballina (led by local historian Terry Reilly, who has conducted a huge amount of research on the story) is working to have the girls remembered, all 137 of them, with 87 going from Ballina workhouse. Other workhouses involved in the exodus were Ballinrobe (25), Castlebar (15) and Westport (10). People from the county who died in the Famine will also be remembered.

The memorial, in the form of a lovely bronze statue mounted on a granite plinth, will be erected adjacent to Mayo County Library, Ballina. The valuable bronze statute has been donated by businessman Mr Frank Kerins, a former resident of the Quay, Ballina.

For the unveiling event – which will take place at 2pm on October 19 – a choir and musicians will perform in a musical tribute being planned by Regina Deacy, Director of Music, St Muredach’s Cathedral. The names of the girls will be read out by schoolchildren from around the country, and a floral tribute will be laid. A short video will be filmed by Behy NS and uploaded to YouTube in a bid to encourage Australian descendants of the orphan girls to visit Co. Mayo at some stage in the future and learn more about their roots.

An exhibition in the Jackie Clarke Collection will run all week, while illustrated talks, re-enactments and other fringe events are being finalised.  A mass in remembrance of the girls will be celebrated on the Friday morning. Ballina Costume Company also plans to make a quilt with the names of every girl embroidered on patches. Women from around the county will be involved in this project. Schools and representatives from around the county  are being invited to attend, as are people living in the area with Australian links. 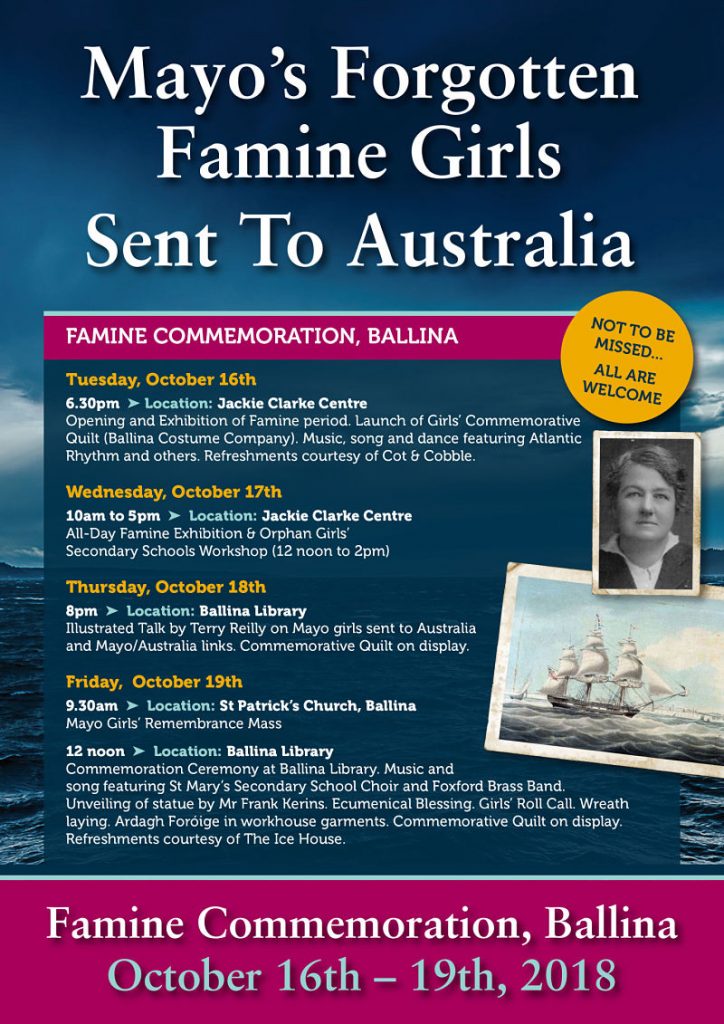 Keep an eye on our website for more details in the coming weeks, and in the meantime, further details are available by contacting terryreilly@eircom.net. 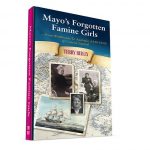 Mayo’s Forgotten Famine Girls tells the story of 137 youngsters from Mayo, the majority orphans, sent to Australia from Irish workhouses 1848-50.

The girls speak, and through their voices we learn of their dreadful famine experiences, workhouse life, the voyage to Australia, and what became of them. Based on fact and extensive research.