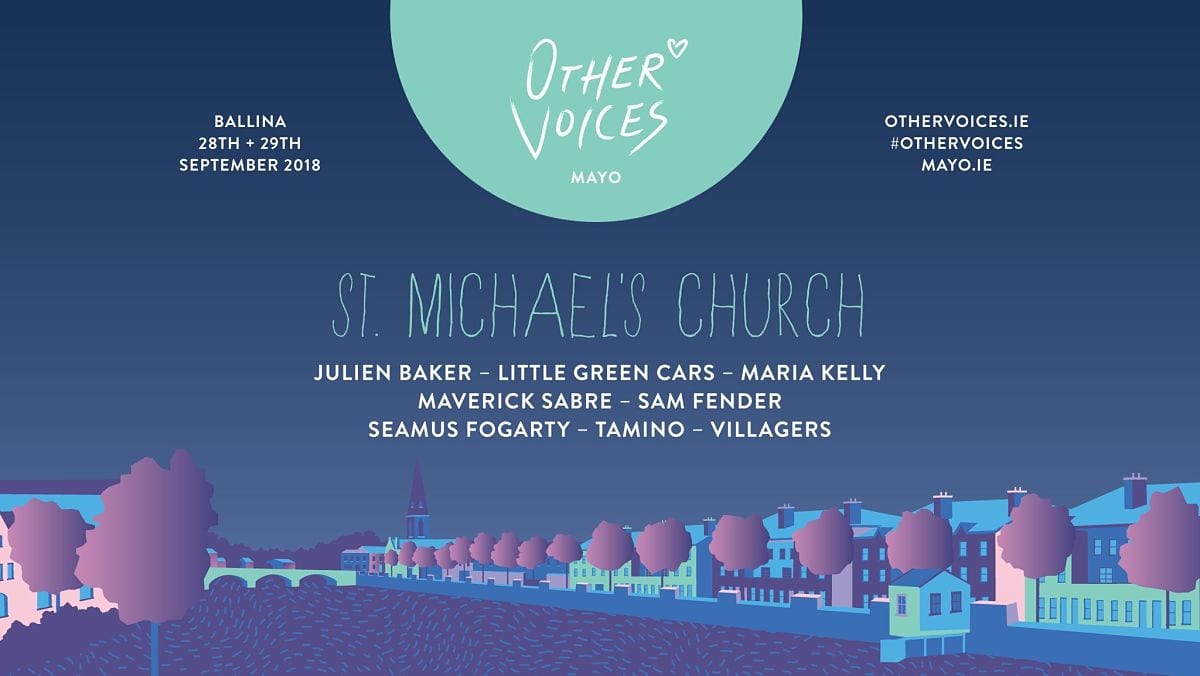 “To take Other Voices north along the Wild Atlantic Way to beautiful Ballina and to work together with all our partners and stakeholders in Mayo is a real delight. The music will be exceptional, the conversations will be engaging, inspiring and provocative. The whole thing will be captured, streamed, broadcast and platformed  locally, nationally and internationally and will connect Ballina to the world.

It’s going to be a wonderful weekend for the town and for all those who travel to Ballina.”

Here’s our final update on Other Voices Ballina 2018 with everything you need to know about the fantastic weekend that lies ahead.

St. Michael’s Church is set to host the TV recording sessions for Other Voices Ballina this weekend, September 28th and 29th.

Villagers, Little Green Cars, Tamino, Julien Baker, Maverick Sabre, Seamus Fogarty, Sam Fender and Maria Kelly will perform in the beautiful 250-year old chapel, with each concert filmed for broadcast on RTÉ Two in early 2019. The day-to-day Church events have now been announced and music fans who have bagged Church tickets in competitions will find out which artists they will get to experience at the Festival. See www.othervoices.ie for all the details.

In Local Voices, the Other Voices Music Trail day-to-day line-up has also been revealed:

More than 40 free gigs will run across Friday and Saturday at the following venues:

Musical tastes will be sated with a diverse, eclectic offering, from punk to pop, traditional to electro, acoustic to rock, the very best of new Irish music on the Other Voices Music Trail. Music fans should register now for free at www.eventbrite.ie and tickets can be exchanged for Festival wristbands at the Other Voices Hub on O’Rahilly Street from Friday morning.

RTE 2FM will broadcast from the Festival with Tracy Clifford going live from Paddy Mac’s on Friday September 28th between 1pm and 4pm, featuring band sessions and interviews and later that night 2FM Rising bring their stage to Bar Square, with performances by Mango X Mathman, Tebi Rex and Inhaler.

The Other Voices Hub and Waxing Lyrical art exhibition

The Other Voices Hub at O’Rahilly Street, which runs from Wednesday through Sunday, will be the key meeting point in the town, where Festival goers can collect wristbands, schedules, maps and information. The walls will be filled with the work of Waxing Lyrical, a collection of artworks curated by artist Aine Ni Chiobhain, which explores the landscape of musicians faces through varied mediums.

Waxing Lyrical will also present live music and DJ sets in The Other Voices Hub across the weekend.

After Dark – the After Party in the Cot & Cobble

After the roaring success of After Dark’s first outing in Dingle last December, Other Voices are delighted to be teaming up with resident buzzers This Greedy Pig for another instalment of After Dark – a party that kicks on in to the wee small hours after things wrap in St. Michael’s Church, on Friday and Saturday night, at The Cot & Cobble. A stellar line-up of selectors will take to the decks for two nights of seriously good tunes. Tickets are limited and priced €10 plus booking fee and available now on www.eventbrite.ie

For those who haven’t scored Church tickets, all the performances will be live streamed to Music Trail venues around Ballina, powered by Virgin Media’s super- fast broadband. Niamh O’Driscoll, Senior Manager of Brand, Marketing and Communications at Virgin Media, said:

“Behind these incredible acts are inspiring stories of hard work, dedication and incredible musicians.  As they prepare for the two-day festival, we are honored to bring their friends, family and community closer to each act during the Other Voices Ballina 2018 Festival, in new and innovative ways using our award-winning broadband service.”

Other Voices hosts, St Michael’s Church, celebrate 250 years in the Parish on Sunday September 30th, with a service that welcomes one and all. Families attending Other Voices Ballina will enjoy Our Coasts, Our Voices in association with Clean Coasts, at The Newman Institute in the town, on Saturday, which will run throughout the day and features marine environment workshops and games for little ones and grown-ups alike.

Two utterly fascinating days of seminars, talks and conversations on Wednesday 26th September and Thursday 27th September! Open to all on a first come, first-served basis.

Ireland’s Edge – The Creative Space, at the Jackie Clarke Collection on Saturday, will look at how creativity, imagination and empathy are becoming more central in shaping our world. Innovators in arts and culture will meet with fellow creators and thinkers in technology and industry to discuss the importance of collaboration and diversity. These include Ballina Scientist-Astronaut candidate Norah Patten, Intel Vice President Eamonn Sinnott, Professor John Naughton from the University of Cambridge’s Centre for Research in the Arts, Social Sciences and Humanities, internationally acclaimed harper Laoise Kelly and President Emeritus at Institute of Designers in Ireland, Kim Mackenzie-Doyle.

The icing on the cake for those making the musical pilgrimage is Food Fleadh Ballina, an explosion of exciting tastes for all palates over the weekend, showcasing the very best of fresh, seasonal produce from the rivers, seas, farms, gardens and lands of Co. Mayo. With food markets, craft beers and cocktails, cooking demos, seafood foraging, adventure dinners and much more, Food Fleadh Ballina elevates the Other Voices experience to a whole new level. For tickets and more information see www.ballina.ie

For more information on all things Other Voices Ballina 2018 and the Other Voices Music Trail, including details on how to win tickets for the St Michael’s Church Concerts, visit othervoices.ie