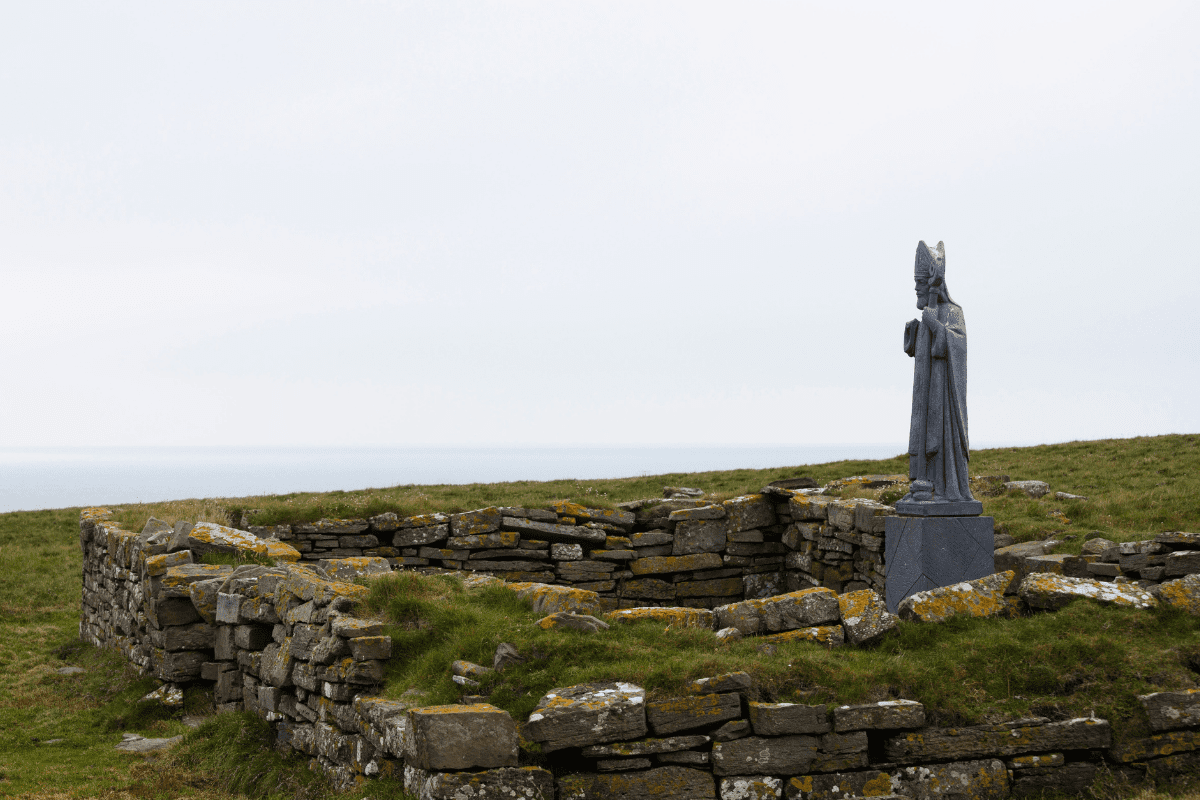 Across North Mayo there are a number of landmarks associated with St. Patrick, the Patron Saint of Ireland. Here are some of the stories of St. Patrick in North Mayo!

The most famous landmark in our region, indeed possibly Ireland, with a strong association to Saint Patrick is Downpatrick Head in Ballycastle.

Legend has it that the tyrannical Celtic chief, Crom Dubh (meaning ‘the dark, stooped one’) lived on the edge of Downpatrick Head. St. Patrick, on paying a visit to the neighbourhood and hearing of his misdeeds, set out to visit him. Seeing the saint approach, Crom Dubh set his dogs on him. The saint, however chastened the hounds.

Crom Dubh in desperation set a fire with which to hinder Patrick. This did not go down well! Picking up a stone, the holy man hurled it in anger into the middle of the fire, sinking it deep into the earth. Today, this hole is known as ‘Poll na Seantine’ (‘Hole of the Old Fire’) and visitors can gaze from the edges of the blowhole, deep into the sea from the Spirit of Place viewing point.

Upon reaching Crom Dubh, St. Patrick tried to reason with him and convert him to good ways, to no avail. Such was the fury of the conversation that Patrick in frustration struck a blow to the ground so hard that the ground gave way, separating Crom Dubh’s home – and the chief himself – from the mainland.

Crom Dubh had no choice but to remain on the sea stack until the midges ate the flesh from his bones! The separated sea stack today is called Dún Briste (meaning ‘Broken Fort’).

Folklore says St. Patrick founded a church on Downpatrick Head, and the ruins of a later built church now mark the location. A statue was erected in 1912 but later replaced in the 1980s. Open-air mass is celebrated (subject to weather conditions) on the headland on the last Sunday in July, this Sunday being called Garland Sunday.

One piece of folklore states that the Foghill Standing Stone was erected by St. Patrick himself. It is more likely the stone was erected long before the arrival of Christianity to Ireland.

In St. Patrick’s “Confesseions” the saint mentions only one place name in his writings, ‘Focluth’.

“I heard the voices of those Irish who live near the woods of Focluth near the Western Sea. They called out to me with a single voice: “We beg you, holy boy, come here and walk among us!”

It is believed Foghill was the ‘Focluth’ mentioned by the Patron Saint of Ireland.

A statue of St. Patrick was erectd in his honour in 1936. The church in Lacken is dedicated to St. Patrick.

The Killala area has strong links to the Patron Saint of Ireland. At Crosspatrick it is said that the holy man is said to have come into conflict with the twelve sons of Amalgaid Mac Fiachrae (who gave his name to Tír Amhlaidh/Tirawley) the king of Connacht. It is said that the sons captured Patrick and brought him to the Hill of Tara, the seat of the High King of Ireland, so the King could solve a dispute.

St. Patrick appointed Muiredach Mac Echdach (St. Muiredach) as the first Bishop of Killala. For centuries St. Patrick’s Cathedral (now Church of Ireland) Killala was the Episcopal See of the diocese of Killala, until the founding of a cathedral in Ballina which is dedicated to the first bishop Muredach. The feast of St. Muredach is 12th August.

The Roman Catholic church and Church of Ireland Cathedral are dedicated to St. Patrick in Killala.

On the Killala Road in Ballina, you’ll find St. Patrick’s Well. It is said that St. Patrick converted local people here. Local folklore available on dúchas.ie reveals the story of a fish that is said to call the well its home.

“In the Blessed well there is a small fish about four inches long with a burned spot on its back. This mark is supposed to be from a burn caused by a woman who caught the fish and tried to cook it. Any one who sees this fish is granted their request.”

The historic Leigue Cemetery has connections to the Patron Saint of Ireland, and is another stop when following the trail of St. Patrick in North Mayo.

It is rumored in old records and documents from ‘The Life of St. Patrick’ that the saint and his disciple travelled in the North Mayo region in the fifth century. St Patrick apparently told his companion, who was exhausted by the journey, to build himself a church on the first spot upon where his axe would fall.

According to the excellent and detailed Sacred Landscapes website, which contains much detailed information about sacred North Mayo sites, the location of where Olcan dropped his axe was known as ‘Leac Finn Baile’ – “The Townland of the Great White Stone”, later to be known as “Liag Na Manach” meaning  ‘The Great Stone of the Monks’.

This monument is deemed to be one of the oldest Christianised monuments in Ireland. Named for ‘Liag’ or also pronounced ‘Leac’, meaning ‘The Great Stone’ , the rock, located at one of the high points of the old graveyard is quite impressive,  with a sculptured cross encrusted in its face.

The Roman Catholic Church in Ballina is dedicated to St. Patrick.

In the townland of Truiste near Crossmolina, it is said that while St. Patrick was travelling to Croagh Patrick ahead of his Lenten fast on Ireland’s Holy mountain he stopped and rested by a well.

The saint drank from the well and blessed it. The well is said to have the ability to restore eye health.

Check out the shape in the trees over the well! 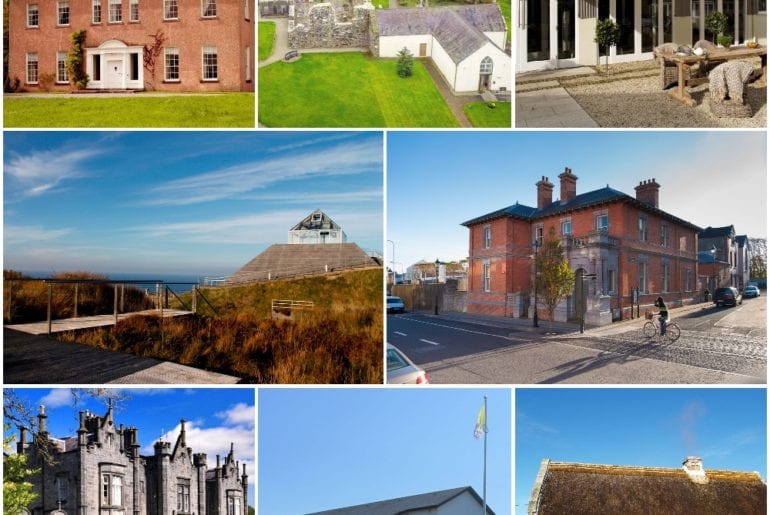 Your comprehensive guide to the museums of North Mayo 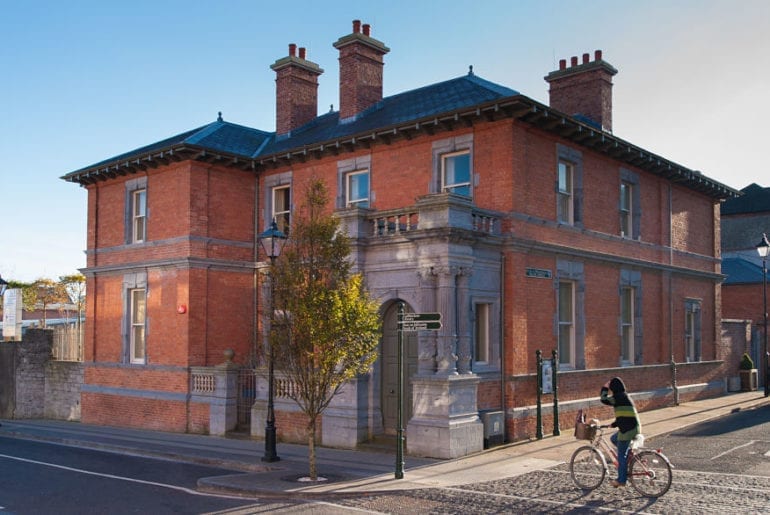 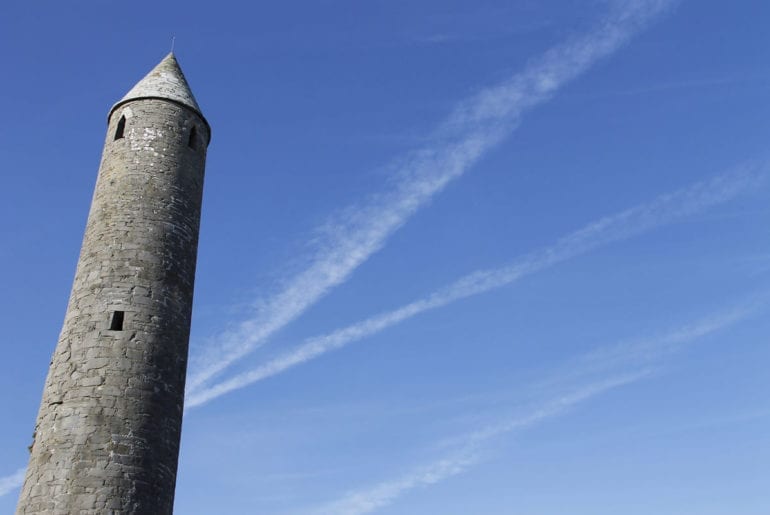 The Round Towers of County Mayo