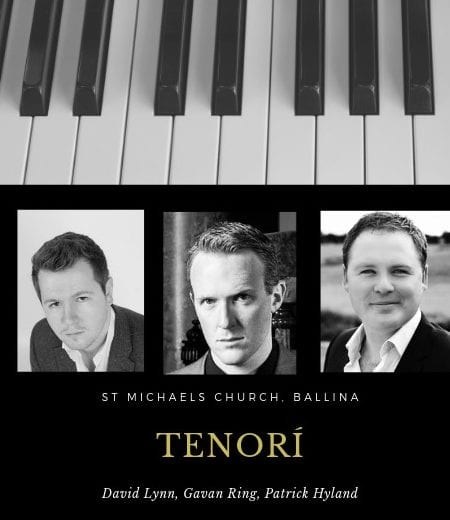 Tenorí performing in Ballina , 13th June 2019 a new Three Tenors Group, compromising of three of Ireland’s finest young tenors, Gavan Ring, Patrick Hyland, and David Lynn. Wishing to evoke the memories of Italia 90 with a distinctly Irish feel, Tenorí aim to charm their audiences with a blend of Italian opera, Irish song, and old favourites. Their concert in St Michaels Church, Ballina, will be the inaugural concert of what is hoped to be a fruitful collaboration between the three friends.

With interesting and successful careers in their own right, Kerryman Gavan Ring has just moved from being Ireland’s foremost baritone to the heady heights of tenor, and quite a splash he’s making. Ring has performed with Glyndebourne, Welsh National Opera, Opera North, Garsington Opera, and Opera Holland Park. Upcoming tenor roles for Ring include his tenor debut with the RTÉ National Symphony Orchestra for RTÉ Lyric FM’s 20th Anniversary Concert, the role of Frederic in Pirates of Penzance for Cork Opera House, and the leading tenor role of Azim in Stanford’s Veiled Prophet and Juan in Massanet’s Don Quichotte for Wexford Festival Opera.

Kildare man Patrick Hyland is a multi award winning tenor with two albums to his name, and has been a finalist in the Veronica Dunne Singing Competition. Hyland has performed with Glyndebourne Festival, Wexford Festival, OTC, Lyric Opera, and has an upcoming lunchtime concert with the RTÉ Concert Orchestra on August 13th.

David Lynn, a local from Ballina, a proud Mayoman, has been working this season with English Touring Opera, singing Malcolm in Macbeth, covering the roles of Macduff and Leicester in Rossini’s Elizabeth 1, for which he had a few hours notice to jump in recently, earning him rave reviews. Lynn is a former NI Opera Young Artist, Garsington Opera Alvarez Artist, and a recent graduate from the the Alexander Gibson Opera School. He has worked with Wexford Festival Opera, Opera North, Scottish Opera, Opera Theatre Company, Lyric Opera. He is working with Scottish Opera this summer on Breaking the Waves, a new piece for the Edinburgh International Festival, and will travel to Brisbane and New York with the production in 2020.

Tenorí on 13th June will be accompanied by Paul McKenzie, a repetiteur of some repute, and we are delighted to have acquired a Steinway Grand Piano for the event, which will add so much to the music-making.

“We are delighted to be coming to Ballina for our inaugural concert, and hope to see as many locals as possible for a very special event. It is rare to find opera coming to rural Ireland, but that is what we aim to do”. 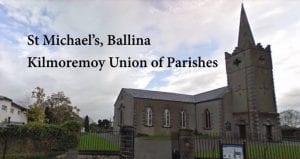