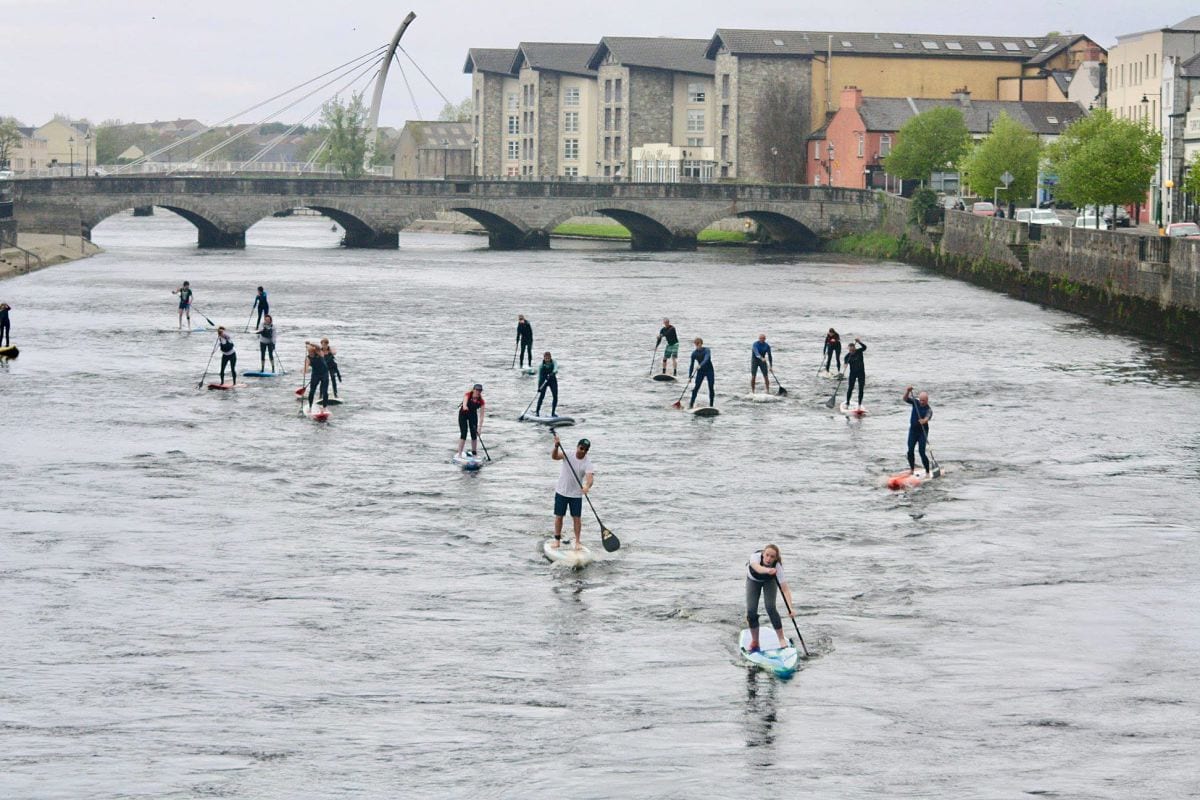 The 5th Annual Connacht Battle of the Paddle 2019

Here is an exciting account of last years events 2018;

Mikee Hamilton of Harbour Sup & Sail sums up an amazing event over the May bank holiday weekend.

Charts in the lead up to the event looked stacked to deliver some good conditions for the event and on Saturday morning Enniscrone beach greeted competitors with contestable 2-3 ft surf .  After a quick riders meeting at 9 am the event got underway with the first round of Ladies and Mens Sup Surf .

The ladies kicked things off and quickly got busy in the fun size left and right peaks, despite strong winds, all the competitors scored a good mix of lefts and rights with local ladies Nicola McCutcheon and sisters Lucy & Mia Hamilton advancing .  The men’s heat one got underway and with the tide starting to drop it threw up some good ramps. Paul Byrne had the better of several exchanges with long fading rights and crisply finished lefts . John Stapleton also advanced from heat one finding the speed down the line to bag a couple of good scores .  Heat two was a four man battle; Tony Doherty had traveled down from Northern Ireland and looked on point after a dawn pre comp free surf .  Sets were consistent allowing everyone plenty of chance to rack up some scores . The heat went down to the wire with Samir Naji just edging out Nick Seymour to head to the Semis with Tony . Heat four spread the field over 3 peaks with Jonathan Woods and Nat Forde both picking up long walled left and right wedges to comfortably advance to the Semis .  When the lunch bell sounded everyone was treated to a feast of BBQ meats and fantastic salads; that have become the standard at the Connacht B.O.P.

The forecast for Sunday was looking sweet, with a new NW swell due to kick in overnight, it was decided to go on hold till midday Sunday with the surf event .  The Pilot bar served up some delicious food and drink.  The competitors enjoyed a good catch up and chat. The wind had glassed off late evening and Tony Doherty and John Stapleton capped of the day with some glassy sunset walls.

Sunday morning arrived and as predicted the swell had increased with good head high sets .  The Distance riders meeting was to be held in the heart of Ballina, just below the famous Ridgepool. Boards were loaded onto the trailer at the finish and some shared lifts and taxi runs, everyone was ready to get on the water .  Blessed with a great turnout on the day, we had eighteen racers with a few keen first timers joining the field. The strong southerly left the whole course downwind; much to everyone’s delight .   After getting on the water and facing upstream, the 30 second call went up and boards were turned for a rolling start .   The horn sounded and Mia Hamilton powered away closely followed by Paul Byrne, Nat Forde & John Stapleton, with Keith Gorman and Lucy Hamilton also well in touch with the lead group .   The field opened up with some outstanding paddles in the crossover class, with two first time Racers Mens and Ladies; Hans Fredricks and Mich Muldoon going on to claim class victories .

The Elite race passed the halfway point, with Nat Forde holding a tight lead over Paul Byrne and John Stapleton. With around 1 km to go, Byrne dropped the head, shifted up a gear and made a break along the Belleek forest rim . Nat and John left it too late to answer as Paul crossed the line with a solid finish with 3 board lengths to spare.  Mia Hamilton never looked like getting caught from the start, despite her sister Lucy holding her draft for a few km’s  she still cruised home to take the ladies, with Lucy second and first time racer Orna Woods claiming Third .  The crossover was a battle to the line, both men and ladies with the strong tail wind, was over the line within 25 minutes . Excellent performances from everyone and all vowing to be back for more next year .

With the distance out of the way just a 7 km drive back to Enniscrone . It was quickly decided to make the best of the swell, thereof the ladies final got underway on the Beach . After a trojan effort and some quick gear ups; Nicola, Lucy and Mia took to the water.  The waves were tricky, and the wind, had to be battled at every stage.  Nicola racked up 9 waves in the heat, with Lucy and Mia both picking up some respectable scores given the tough conditions.  Amazing spirit between the ladies,  the heat concluded on the beach with big hugs and smiles.  When the scores were totaled up, Nicola was out on top with Mia just edging Lucy out by one point to claim second place in the Sup Surf ladies .

The Men’s Semi’s followed on the beach break, with a five minute overlap to keep the event fluid. Paul Byrne and Tony Doherty both picked off solid waves in their respective heats, with solid down the line carves and fluid style to secure places in the final.  The level of surfing in the Semi’s was excellent from all competitors, with Johnathan Woods and Nat Forde placing worthy seconds in there respective heats and gaining spots in the surf off for 3rd overall .

After another brief riders meeting and study of conditions, it was decided to move the event onto the reef break; to take advantage of some quality wind swept wedges.  The crew pulled together and 45 mins later we were set up and ready to go with the Men’s final and Surf Off.  Tony and Paul made the walk out across the reef and after a 10 minute paddle out, it was on!  Conditions were on the limit wind wise.  Tony Doherty was throwing himself over the ledge on anything decent that came his way, and made light of tricky overhead drops on his backhand.  Paul Byrne took a slightly more calculated approach, after winning the distance that morning, still found the strength to bag the wave of the day and tame some fairly crazy sections to get a solid score on the board.  Paul backed up with a shorter wedge with a strong finishing turn to clinch the final.

The last heat of the Men’s surf for third place did not disappoint; both competitors dug deep and gave the conditions there all.  Johnathan Woods got a long solid wall and put down a good line, to leave him needing just a solid backup. Nat Forde moved in deep to pick off a small inside wedge, as he paddled back he found himself in prime position to nail the best wave of the heat, and capitalize on the sections as it wheeled down the reef.  Johnathan had a last dig at a couple, to try and back up his keeper, but as the clock ran down, it was Nat Forde who had done enough to secure the third place .

With one event left to run, the Technical sprint, everyone was feeling the weekend.  Quick decisions needed to be made.  The tide was filling, the wind and swell were raging ,so we decided to throw out an ‘L shaped course’, around 1.5km loop, in and out of the surf, with an upwind and downwind leg .  Aaron Melvin kindly set the course, wading out into the surf with the inside buoy.  Following a riders meeting, the field began to grow with Nicola McCutcheon & Martha O’Reilly jumping on crossovers and Samir Naji,  just back from kiting the beach gearing up.  Boards and kit assembled on the ramp at Enniscrone pier, it was time to get it on.  Eight racers took to the water. After a solid start from all, Keith Gorman took control and led the race from start to finish.  Some epic mini battles, short & long glides and the usual carnage around the buoy made the race one of the highlights of the weekend; which really wrapped up the event in style.  Paul Byrne fought hard, never letting off the gas, to claim second in the Tech, also to clinch the ‘Connacht Bop Men’s title’.  While Mia Hamilton held a solid lead in the Tech, also came home first in the ladies, securing the ‘Connacht Bop Ladies title’, with two firsts and one second .

Massive congratulations to all the winners and to everyone who competed in the event.  Thanks to Event sponsors: Harbour Sup & Sail, Irish Sup, Billabong Europe and Typhoon International.  Special thanks to everyone who helped out, supported in any way large or small or helped make the event such a great success.

Plans are already being hatched for next year, we hope to welcome more competitors from Ireland the UK ,Europe or even further afield.