A sentinel, powerful, solitary, majestic.  As iconic a tower,  as the great Skellig Michael in Kerry. The home of the stone beehive huts of ancient monks. In sight of the famous Stags of Broadhaven Bay. Standing, holding its own in awesomeness, is Dún Briste at Downpatrick Head. It stands 50 meters tall, 80 meters from shore. Here is the story of the 2016 Dun Briste sea stack climb!

It was once, in the times before times, a part of the headland facing out into the Atlantic ocean. Storms and waves and the solubility of calcium, eroded a small hole in the head. The hole became a very large one, until a veritable bridge was all remained between the stack and the point of the head.
One night in 1393, a fierce storm occurred. A tidal wave exploded against the head and the bridge collapsed. The storm abated and the people saw the point of the headland with its fort and farm, now only a pillar in the sea. Those who survived the storm were stranded up there. Ships ropes were used to lower them to sea level and escape. It has been named “The Broken Fort” ever since, and because they were all Gaelic speakers, “Dún Briste”.

Sometime around 430 AD, St.Patrick, we are told, established a small church on the head. The stone footprint is still there to be seen. The Christians were forever inventing stories and myths, to Christianise places and things. The myth here was that St. Patrick arrived here and called on the chieftain of the fort people, to come over and embrace Christianity. The chieftain, one Crom Dubh, was in no way inclined to listen to this Patrick guy, and calling him a trespasser,  ordered him off his land. St. Patrick lost the rag with this pagan and struck the bridge with his crozier, Moses style, and it collapsed. He left Crom Dubh and his followers, both physically and philosophically separated from the faith. Strangely , that story is still told in the oral and the printed traditions of the place, despite the fact that St Patrick and the actual collapse of the land bridge are one thousand years apart.

In the words of the great Kerry seanachai, Eamon Kelly, “things rested so!”.  The grass grew, fertilised by the seabirds. It died in winter and grew again in spring, ungrazed and untrodden  by feet for another 600 years.

Seamus Caulfield and his father Patrick, both archaeologists, and responsible for the discovery and development of the Ceide fields on the nearby hills. They decided with their friend Martin Downes, a professor of biology, to land on the top of Dún Briste by helicopter and investigate and survey the top. It was a dangerous stunt, as the chopper could not land on unknown ground. The last few feet had to be dropped or jumped. The downdraft from the rotors could easily blow them over the sides of the stack.

They landed safely, and found remains of two buildings and parts of field walls. The surface measured 50 meters long and 15 meters across its widest point. One field wall had an interesting door or run. It was about two feet square. It allowed sheep to pass through, but not cattle. It is a medieval feature and is seen in some parts of Mayo. The headland is covered in a plant called sea pink, which is a lovely pink flower. There is no sea pink on the stack, only 80 meters away on the headland. The dominant grass was red fescue. Not being grazed it grew in bunches about a foot tall and was thickly matted. They also found a broken quern stone.

In 1990, three UK climbers, climbed up a groove system on the seaward side of the stack.

A Scottish climber and his assistant, Mr Iain Miller and Paulina Kaniszewska, made four failed attempts to climb the sea stack. Failure was always due to the sea being too rough for a boat to put them on the rock safely. There is a deep hole at the seaward base of the stack, and a horseshoe bay beside it with a tunnel to the other side of the headland which creates a fierce current. The collapsed bridge so long ago has left great sections of rock on the ocean floor between the stack and the headland. All of these factors create a maelstrom of currents, even when the surface seems calm. 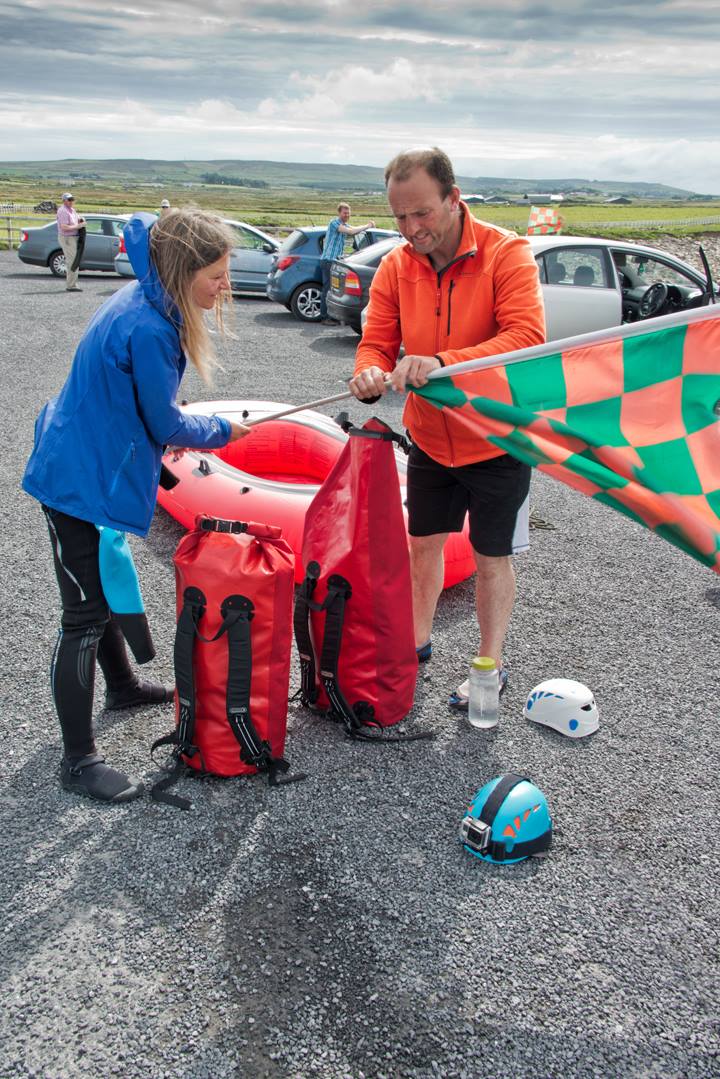 Finally on the 27th of August 2016, the Dún Briste sea stack climb came to pass. Using a small inflated dinghy, Iain and Paulina managed to clamber onto the rock base. They climbed to a ledge above the water line, and hauled up the dinghy and all their equipment. They climbed again to a ledge about ten metres above the water and set up their base. Carrying anchors and carbiners and a bag of powdered chalk, lain set off slowly and carefully, following his plan of this climb. Every so often, depending on the rock and the handholds, he placed an anchor in a crack and his rope passed through a carbiner attached to the anchor. Should he fall, the rope would stop him from this point, with his assistant at the other end controlling the rope. He climbed and anchored, climbed and anchored, slowly and steadily.

In some places you could see the white of the chalk covered hand marks on the rock wall, but most of them were masked by the white painting of the seabirds, guana.

Towards the top he encountered a layer of solid smooth limestone, which was extremely difficult. He spoke later of his terror of impending death as he climbed past it. His assistant Paulina payed out his life line to keep it slack and not chuck him. At the same time, she was ready to take the shock weight if he fell to his last anchor. She was carrying a Mayo flag and placed it where she operated from, one third of the way up. It seemed funny that the flag was sponsored by Máirtin Flannery, to be used to bring attention to Mayo’s all-Ireland Final appearance and by a Scottish and a German who had known of the great famine going back 65 years and were only too happy to help.

Finally Iain clambered to the top, and moved away from the edge. Then he stood tall with his arms outstretched, like the statue of Christ the Redeemer on mount Corcovado at Rio de Janeiro! He saw the view, witnessed by only six people in 600 years, an average of one per century. He also saw the rain coming across the sea and stayed only about an hour. As it was, he was abseiling down when the rain hit him. Iain and Paulina both got off safely to the great cheers of the large crowd watching from the headland.

The layers or stratas of the stack and cliffs, were the crust of the forming earth, pushed up by techtonic  and  volcanic action over 350 million years ago. While a truly remarkable achievement, Mr. Miller’s Dún Briste sea stack climb shrinks somewhat in the face of such enormity of time!

Click on the video below to see Iain and Paulina in action.

Thanks to Lewis Keating for this!
Photos: Iain Miller and Padraig McCann.