Kilcummin – A journey through Time and Beauty in Mayo North

Join Ballycastle’s Michael Callendar on a journey through magical Kilcummin and learn about one of North Mayo’s true secret treasures.

Kilcummin is rich in history dating back 6,000 years and is blessed with spectacularly beautiful coastal scenery. The area is full of remnants of Neolithic existence and more recently the French invasion in 1798. The Neolithic age can be dated back to between 4,000 and 2,500 BC. The area from Kilcummin and going West including Ceide Fields and Belderrig was inhabited nearly 6,000 years ago by a large population of dairy farmers. Megalithic structures are the product of this age. The word megalithic describes structures made of large stones and comes from the Ancient Greek meaning “great stone”.

There is ongoing current discussion about the first known existence of human presence in Ireland dating back to 12,700 years ago, relating to the discovery of bear bones that clearly show from carbon dating the existence of hunting human activity at that time.

Directions to Kilcummin and points of interest

– From Killala on the R314 (Wild Atlantic Way) cross over Palmerstown bridge and continue straight on signposted to Kilcummin.

– From Ballycastle on the R314 (Wild Atlantic Way) at Palmerstown bridge turn left signposted to Kilcummin.

After 1.6km on your left is Carbad More Court Tomb – the entrance is through the metal gate. Carbad More is a double Court Tomb, but is covered in dense vegetation thus preventing a good overview of the structure.

Continue 600 metres and on your right is Rathfranpark Wedge Tomb. A Wedge Tomb is a type of Irish chamber tomb, named so because the burial chamber narrows at one end producing a wedge shape in elevation. Wedge tombs were built between the Irish late Neolithic and middle Bronze Ages (2500-2000BC). Access is easy over a stile. You will clearly see Rathfran Priory (1247 AD) and to the left of the Priory are the ruins of Rathfran House.

Continue 300m to the crossroad and turn right, signposted to Rathfran graveyard. and you will come to the path to Rathfran Priory where access may be tide dependent. The Priory of the Holy House here at Rathfran was founded for the Dominicans in 1274 by a member of the de Exeter family or William de Burgo. Though much of the priory was rebuilt in the 15th and 16th century, the church is largely 13th century. In 1577, after the dissolution of the monasteries by Henry VIII, Rathfran was granted to Thomas Dexter. In 1590, the army of Sir Richard Bingham, the English Governor of Connacht, burned the priory. The name Rathfran comes from from Rath Bhrannaibh ( the Fort of Brandubh)

Retrace the road back to the crossroad and turn right. After 200m the Ogham stone at Breastagh is on the left and stands 2.66 metres high. The stone is believed to be a bronze age standing stone, with an Ogham incsription added at a later date that reads: L.GG……SD….LEGESCAD on one side MAQCORRBRI MAQ AMLOITT. Ogham is the earliest form of writing in Ireland. It dates to around the 4th century AD and was in use for about 500 years. The Ogham alphabet is made up of a series of strokes along or across a line. Ogham is sometimes referred to as the “Celtic Tree Alphabet” as a number of the letters are linked to old Irish for certain trees and carved on standing stones to commemorate someone.

The stone stands in the Barony of Tirawley which gets its name from a fifth century King Amalgaid Or Amlongad, who had a son named Coirpre, and the inscription may refer to this family.

There are three lovely marked walks in Lacken, Red, Blue and Green.

Continue from the Ogham Stone for 1.6km to the crossroads and turn right to follow the sign to Kilcummin, after 1.3km you will come to the first Trail head. The other trail head is at Kilcummin, 1.6km further on. Walks start at the Trail head at Lacken Enterprise Centre and also at Kilcummin Pier where there are Trail maps.

All three trails are best walked anticlockwise, affording stunning views over Lacken bay to the west and Killala bay and Sligo to the east. It is said that if on a good day you can see Donegal to the north, rain is not far away, and if you cannot see Donegal it is raining!

RED 10km – follow the signs and turn right at the crossroads, 1.5km from the Trail Head at Lacken Enterprise Centre and follow the road to Lacken back strand. On the way on the right, there is a plaque dedicated to Michael Mac Ruadri (1860-1935). Writer, Poet, Patriot and Historian was born here. Look to your left and you will see on the top of the hills the Gazebo, part of the Palmerstown Demesne- more of that another time. At the strand turn right where you will see the standing stone at Foghill, follow the coastal path to join up with the Blue trail.

BLUE 8km -700m from same Trail head, turn right at the sign for Tour d’Humbert 1798 and Forge village, after walking 1.1km you will find St. Patrick’s well on the left, after a further 400m you will see the standing stone on your left (6), follow the Blue walk signs which will bring you to overlooking Lacken strand and join up with the Red trail  On the way you will see a sign for Tír Sáile D on the North Mayo Sculpture Trail (A land where the salt laden winds from the Atlantic governs all things). This is a beautiful structure that you can access from the road or by following the Red and Blue trail

A vernacular sculpture born out of its environment. The stone, quarried and thrown up by the waves, has been laid so as to form a shelter, a sanctuary, a place near the pulse of the tide, the breath of the winds. It belongs only here. Continue along the Red and Blue trail, with stunning coastal views which will bring you to Kilcummin and join up with the Green trail. On your left you will see the place where General Humbert landed in 1798 and you can follow his march to Killala.

On the 4th August 1798, 1030 men and 70 officers under General Humbert left Rochelle in two frigates as part of a planned French invasion of Ireland. They carried extra arms, ammunition and uniforms for the Irish Volunteers who were to join them against England. The frigates flew the British flag and were guided in to land by Irish locals. The original force was to be ten times larger. Humbert landed at Kilcummin on 22nd August 1798 and afterwards took Killala and Ballina. The “Races of Castlebar” followed but the end came with defeat at Ballinamuck on September 8th 1798. On your left is the church of Cuimin, a local folk-saint, now anglicised as Cummin.

A holy man, wise judge and fair arbitrator in disputes, he may have spent some time on Iona and flourished in the 7th century. He may have been a descendant of Conaing, son of Fergus, making him a relative of the illustrious King ‘Awley ’

The church is spoken of as being a well preserved example of the true arch as seen in the radiating round arch of the door and windows, built in the period of the 8th century. North of the church is a cholera burial ground.

Two standing stones may be found and it is believed that this is the location of the grave of St. Cummin. To the west of Cummins grave another extraordinary stone may be found which may date from the 6th century and has been described as a “Sun Dial” and “ A Ships Sextant”. Situated a few yards north of the old church and graveyard “St. Cummin’s Blessed/Holy Well” may be found.

GREEN 4.7km. 200m from the trail head turn right onto the trail, continue up to the T- junction and turn right joining up with the Blue trail, follow the signs for the Green trail.

The “North Mayo Tourism Map & Guide“, produced by the community of Ballycastle has all these details and is available at no cost from Ballina Tourist Office, and outlets in Killala and Ballycastle. 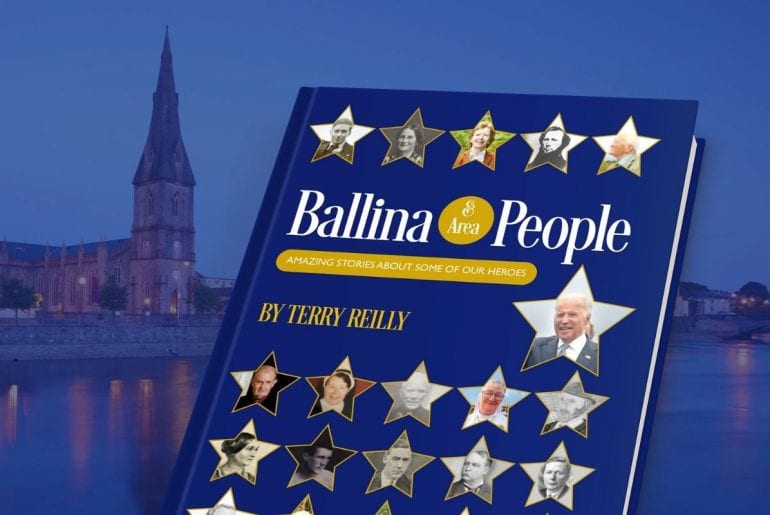 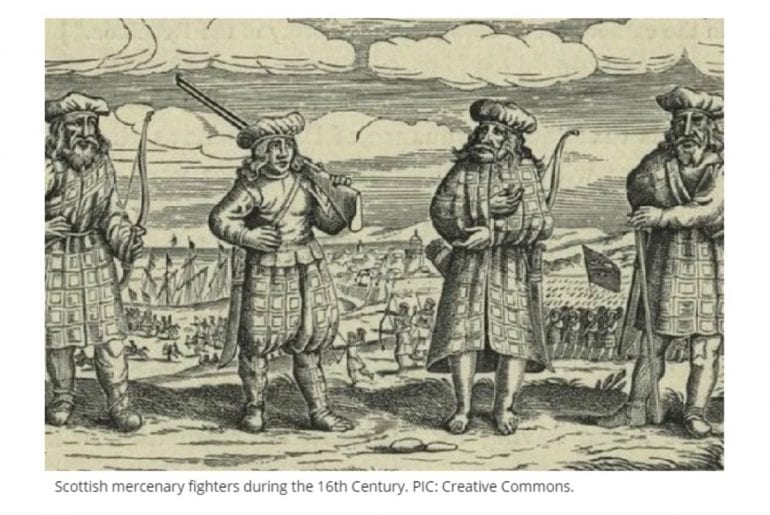 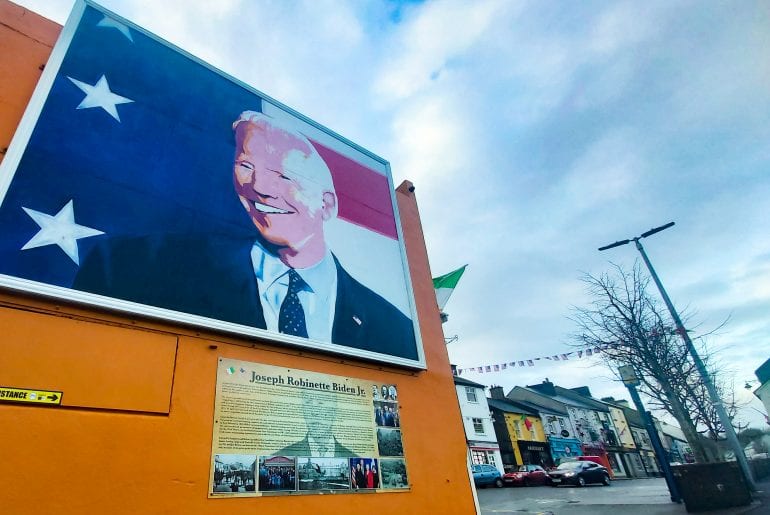 A son of Ballina – US President Joe Biden